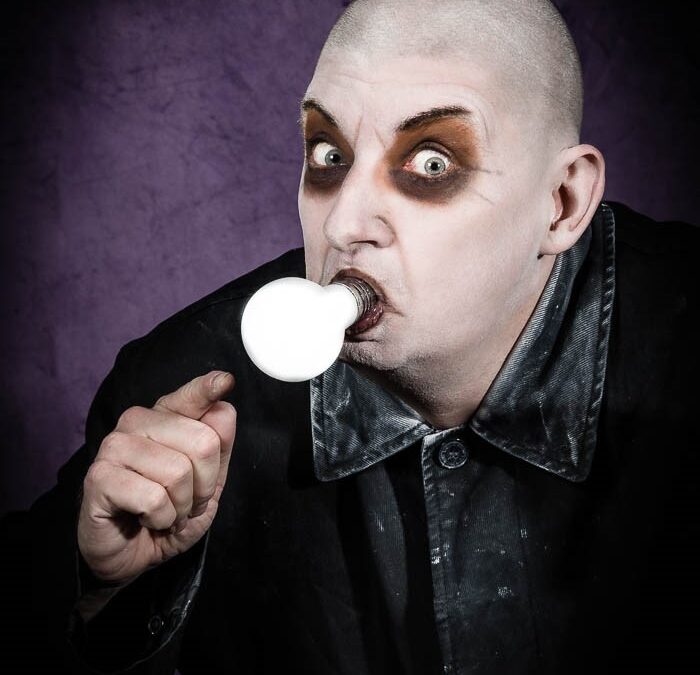 Stepping out for a 4th time onto the Watersmeet stage, Steve Brown will be returning to the award-winning Rickmansworth Players this November in the part of Uncle Fester, for an evening of kooky entertainment with Addams Family, the Musical. Centred around the quirky antics of the Addams family and their ghostly ancestors, the show is bound to raise the spirits and leave the audience in stitches.

Steve couldn’t wait to get into character having seen the show twice before.  ‘My housemate was ‘Gomez just before lockdown so I knew exactly what I was getting into’ says Steve. Speaking during rehearsals, Steve remarks on the professionalism of the cast, crew and directing team who have pulled out all the stops to bring the Addams family to life (or death) in a much shorter than normal rehearsal period.  ‘Everyone has been amazing to work with and in all honesty, this has been one of the best (and silliest!) shows to be in.’

Coming from a musical background and being taken to the theatre by his Grandma from an early age, Steve feels naturally at home on stage with the rest of the Ricky Players family. Now in their 80th year, the society pride themselves on being inclusive and welcoming to all, with many members returning to star in the next production or sing in the society’s award-winning choir.  For Steve, a major appeal of being on stage is transforming into character.   ‘The bigger the costume and make up the better – it helps me overcome any shyness!’ As well as the obvious physical attributes, Steve shares one other passion with Fester – the moon.  ‘I am actually in love with it!’ he claims, which is just as well, as his serenade with the moon in Act 2 is a bit of a scene stealer.

‘The Addams Family’ will be running at the Watersmeet Theatre from Wed 17th Nov to Sat 20th Nov 2021. For tickets contact the box office or head to the theatre website https://www.watersmeet.co.uk/ricky-players—addams-family