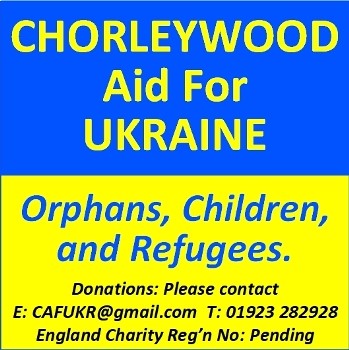 Tais Rantuik  and Pierre Bosdet of the Chorleywood Aid for Ukraine charity are very grateful to everyone’s considerable generosity so far. Over £10,000 has been raised of which over £8,000 has been sent to Tais’ friend and contact Yuliya in Brovary, NE Kyiv, who has for years run a charity helping orphans. That has now extended as she has taken in refugee women & children, & some of her staff who cannot return home to villages outside Brovary, which have been mined by the Russian army. A shipment left last Thursday, this one with donated goods,  £1,200 of requested urgent medical supplies, food no longer available there, plus hygiene & childcare products plus some non-perishable supplies donated by Waitrose in Rickmansworth. Hitesh at Parade Pharmacy has been a great help sourcing medical items at cost. The next shipment is due to go in the next week or two.

They are in the process of formally registering the charity but this takes time. In the meantime to widen the scope of humanitarian aid, donations are being taken to a bank account set up at the Coop and can be made online by direct bank transfer to Mr Pierre N Bosdet, The Co-operative Bank, 08-92-49, 18287158 so that money can be transferred direct to the charity in Ukraine.

They would like to start collecting clothes and bedding both for despatch to Ukraine and for refugees coming here but urgently need a storage facility in the village and are looking for someone who might have unwanted space, a garage or capacity to store such bulky items. Any ideas would be gratefully received by Pierre and Tais who can be contacted on 01923 282928 or cafukr@gmail.com.

This is of course on top of the other ways to support Ukraine including:

As well as a number of other established organisations here in the UK.