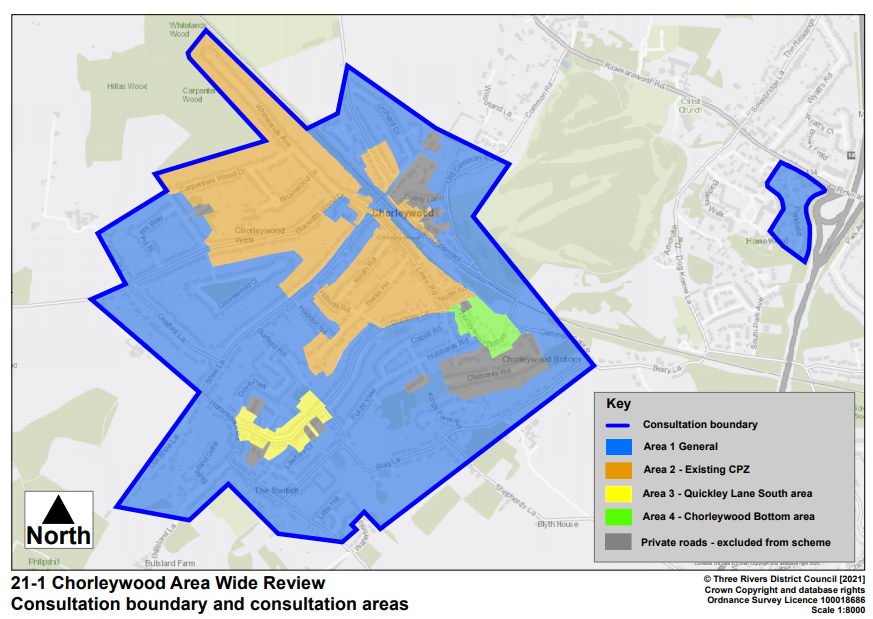 Although the closing date for the parking survey was 19th July, TRDC have since sent out reminder letters asking for surveys to be completed so that the comments can be included.  Your letter will confirm which area you are in and then you can complete all the surveys online at https://www.threerivers.gov.uk/egcl-page/parking-consultations#cw.

CRA understand that TRDC are also interested in receiving in comments from anyone, not just those who have received letters.    You can use the Chorleywood Area 1 ‘General’ Survey to do this.

Three Rivers District Council (TRDC) are consulting every address in central Chorleywood until 19th July 2021 to gain their views on parking in their roads.  There have been requests from many streets, prompting this consultation. Two small areas in parts of Quickley Lane and Chorleywood Bottom will have received slightly modified surveys (Areas 3 & 4) because people in these areas have asked for specific changes in previous consultations. Area 2 refers to roads which are already permit parking zones and Area 1 refers to everyone outside of these 3 areas.

Your letter will confirm which area you are in and then you can complete all the surveys online at https://www.threerivers.gov.uk/egcl-page/parking-consultations#cw. However, please note that the link shown in your letter, will take you directly to the correct surveys for your address.

This is the first stage in a minimum of a three stage consultation and TRDC have assured us that they will very much work to what residents’ request.  Please note what they say “If we don’t see clear support for new or changed parking restrictions in a street then it is unlikely that any scheme will be taken forward there.  Parking improvements will be delivered where there is support for them, subject to agreement from the relevant committee (the Infrastructure, Housing and Economic Development Committee) which will consider the results of our surveys). We will also review the layout and effectiveness of existing Permit Parking Zones (also known as ‘PPZs’ or ‘CPZ’).”

After this first stage, the results will be announced to councillors in the Autumn.  The second stage will show all residents the proposed ideas concluded from requests made in the initial consultation. Everyone will be asked for feedback on these proposals and then this feedback will be fed back into further informal consultations.

The area they are consulting on is shown on the plan above, which also shows which of the four slightly different surveys has been sent to each street.

This news item will be automatically archived on Thursday September 30th, 2021