TRMS presents “A lunchtime taste of Bach, Mozart and … Chuckerbutty” 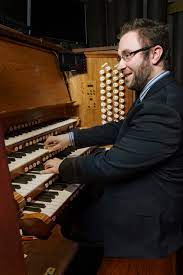 Lovers of organ music will be offered a nine-course ‘taster menu’ at a lunchtime concert in Rickmansworth Baptist Church on Thursday, May 26. Samuel Bristow, a prizewinning young musician who was recently the organ scholar at St Paul’s Cathedral, will perform works by Bach, Mozart, Mendelssohn and Schumann, as well as an arrangement of Samuel Barber’s much-loved Adagio for Strings.

The last of the nine pieces to be played during the hour-long recital will be The Queen’s Procession by the extravagantly named Soorjo Alexander William Langobard Oliphant Chuckerbutty, who had a successful career as a church, and cinema, organist during the first half of the 20th century.